TALK OF THE TOWN: Jude Law and Sadie Frost’s daughter Iris, 19, is set to become one of the fashion world’s most sought-after young models

By Alistair Foster, Joanna Bell And Sophie Cockerham For The Mail On Sunday

With Jude Law and Sadie Frost as her parents, Iris Law has spent her entire life among the elites of the showbusiness and fashion worlds.

And now, aged 19, she is tipped to join them in her own right – following in the footsteps of her famous godmother, Kate Moss.

After making her catwalk debut earlier this month, Iris has become one of the fashion world’s most sought-after young models, with insiders tipping her to soon become a millionaire.

Her first runway appearance was at Paris Fashion Week for Miu Miu, part of the fashion house Prada, alongside her friend Kaia Gerber, the daughter of supermodel Cindy Crawford. Days later, she launched her own collection of handbags, Iris By Iris, made by Mulberry.

With Jude Law and Sadie Frost as her parents, Iris Law has spent her entire life among the elites of the showbusiness and fashion worlds 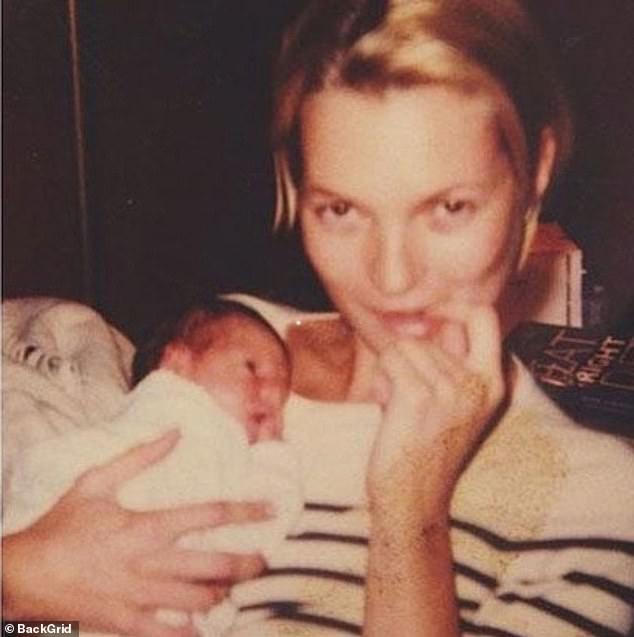 Iris, pictured here as a baby with Kate Moss, is described by friends as ‘very, very sensible’

‘She only finished her A-levels last summer, now Iris could be the biggest British fashion star since Kate Moss,’ one insider tells me. ‘She ticks all the boxes and is absolutely beautiful. With her family history and her well-known friends, she is quickly becoming a brand.’

Iris grew up with London’s infamous Primrose Hill set, which included her parents, Liam and Noel Gallagher, Meg Mathews and Pearl Lowe. She first made headlines aged just two when, in 2002, she found an ecstasy pill on the floor of members’ club Soho House during a children’s party – and put it in her mouth.

Today, Iris – who is described by friends as ‘very, very sensible’ – is part of the so-called Primrose Hill Set 2.0 whose members include Moss’s daughter Lila Grace, 17, and Liam Gallagher’s daughter Anais, 20.

Iris was a bridesmaid at her godmother’s wedding to rock star Jamie Hince in 2011 and appears to share her fondness for ‘bad boys’. She is dating Jyrrel Roberts, 22, a jewellery designer who is fond of posting photos online of marijuana plants.

Iris has appeared on the cover of Teen Vogue and has deals with Calvin Klein Jeans and Burberry, joking: ‘I’ve been wearing Burberry since I was really young. My first baby carrier was from Burberry.’

Poppy is hoping to start university in September and Jamie marked her landmark birthday with a touching tribute, saying: ‘Words will never be able to express how absolutely proud of you we are. Our little curly blonde-haired baby, and first born.’ 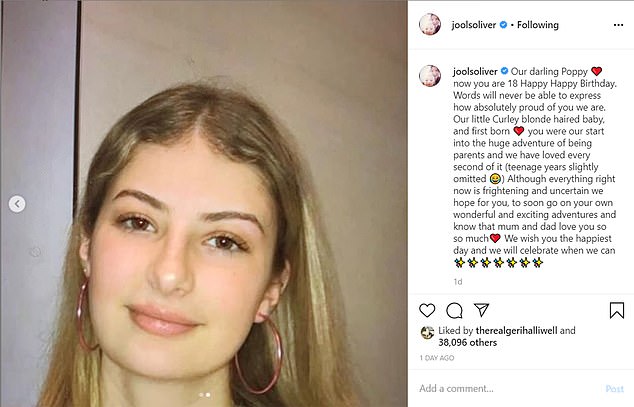 Poppy Oliver, pictured, celebrated her 18th birthday this week. She is the first born child of Jamie Oliver and his wife Jules