A judge for the International Booker Prize has joked that sleep is a thing of the past, after sharing a picture of the ‘tower’ of books he’s already had to read.

Ted Hodgkinson, from London, is Head of Literature and Spoken Word at the Southbank Centre and chair of the prestigious accolade, the winner of which which will be announced in May.

Taking to Twitter, Ted revealed that the huge stack of translated fiction is now ‘taller than him’ and nearly reaches the ceiling of his home.

‘This is the tower of translated fiction I’ve read for the 2020 International Booker Prize so far. It is now officially taller than I am,’ he said.

He also told the Evening Standard  that he has forgone all sleep and social activity and has started reading the translated fiction to his son at bedtime, who is a ‘very discerning critic’. 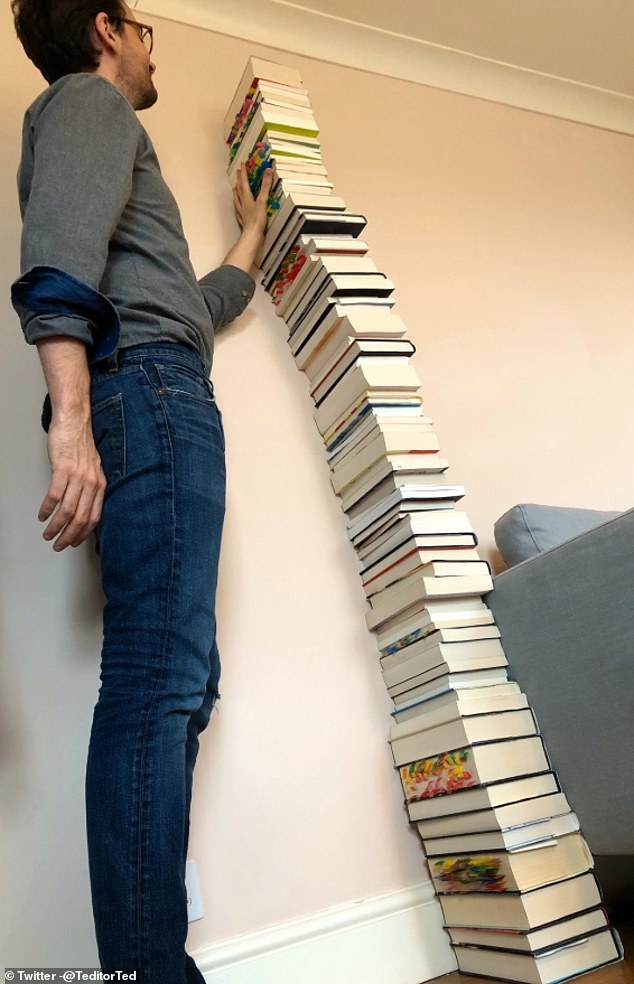 International Booker Prize judge Ted Hodgkinson, from London has revealed the harsh reality of his job role by sharing a picture of the ‘tower’ of books he has to read on Twitter

Describing his tower of literature, Ted wrote: ‘Should reach the ceiling by the time we receive our final submissions. It already reaches around the world many times.’

He added that cycling to work is no longer an option, because travelling on the tube or being driven allows for much-needed reading time.

‘Certain things such as sleep, watching films, any television, cycling to work (because reading on a bike is frowned upon) and did I mention sleep?’, he joked.

‘My son’s bedtime stories have occasionally been swapped for some translated fiction. He’s a very discerning critic.’ 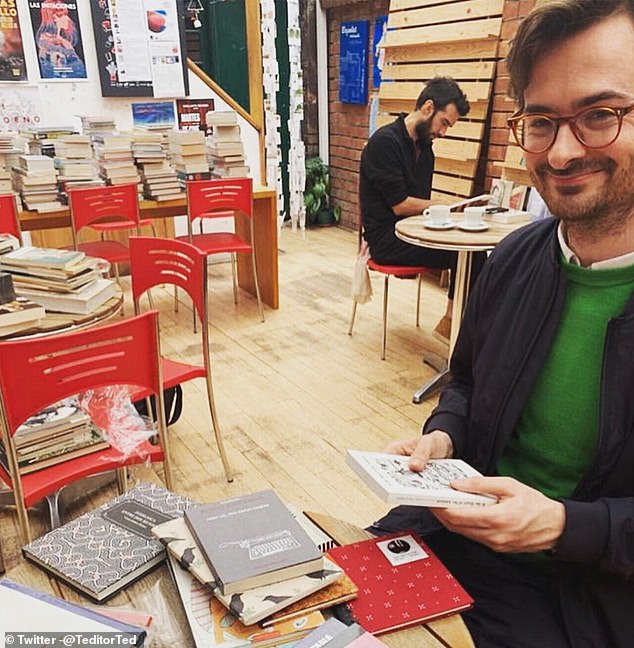 The 2020 international prize will be judged by Ted alongside , Jennifer Croft, Valeria Luiselli, Jeet Thayil and Lucie Campos.

A longlist of books, translated into English, will be published in February with a shortlist in April, before the winner is announced in May.

This will be the fifth year of the evolved International Booker Prize which selected entries from the UK and Ireland between 1 May 2019 and 30 April 2020.

Ted’s Tweet promoted hundreds of likes and several responses from users baffled by the sheer quantity of books he had to read, with one dubbing the task ‘terrifying and glorious’.

‘Holy c**p, how long did it take to read all that? Bravo’, quizzed one.

Ted’s Tweet promoted hundreds of likes and several responses from users baffled by the sheer quantity of books he had to read, with one dubbing the task ‘terrifying and glorious’

Another commented: ‘Terrifying and glorious. I hope they are paying you handsomely. Obviously, the job is its own reward. But it also isn’t.’

A third user teased: ‘Note to self: unsung benefit to being a poetry prize, we can send our judges more books before a hard hat and safety cables are required.’

Ted jested in reply: ‘Yes, there’s less danger of head injury from a stack of poetry.’

The broadcaster previously spoke of the ‘thrill’ he gets from chairing a prize that recognises literature enabled by ‘ingenuity and precision’.

In a statement, he said: ‘It’s a great honour to chair the International Booker, a prize that recognises literature as an art rooted in dialogue, enabled by ingenuity and precision, but also by the courage of authors and translators alike to carry stories across languages and cultures.

‘Through these miraculous and at times conspiratorial affinities we enter lives beyond our own and renew our shared sense of humanity.

‘It’s a particular thrill to be in such stellar company, with polyglot authors, celebrated translators and champions of translated fiction joining me on what promises to be a remarkable reading odyssey.’