By Jerry Barmash For Dailymail.com

The Navy’s E-6B Mercury – designed to survive a nuclear war as a flying communications and command post- has been grounded after it hit a bird during landing.

The $141million ‘doomsday’ plane was landing at the Patuxent River Naval Air Station in Maryland when a bird was sucked into one of its four engines on October 2.

No one was injured in the incident but the damage amounted to at least $2million, while Tim Boulay, a spokesman for Naval Air Warfare Center Aircraft Division, confirmed that one of the engines had to be replaced.

The Naval Safety Center labelled the incident as ‘class A’ mishap, which means it involved death, permanent disability, or aircraft destruction worth $2million or more.

It is still not clear what kind of bird was involved.

The U.S. Navy E-6B Mercury plane is designed to withstand a nuclear attack, but couldn’t handle a bird strike

At the time of the strike, people were on board conducting a systems test. The incident is under investigation, the Navy Times said.

Every year there are at least 3,000 wildlife collisions with military planes, according to the Department of Defense Partners of Flight Program.

The Federal Aviation Administration says commercial flights felt the brunt from another 2,300 strikes.

This year marked the 10th anniversary of the most memorable bird strike, when a US Airways jet headed for Charlotte, piloted by Captain Chesley ‘Sully’ Sullenberger, made a ‘Miracle on the Hudson’ after a flock of geese knocked out the engines.

All 155 passengers and crew survived.

The latest incident comes just months after another E-6B was clipped being transported from the hangar at Tinker Air Force Base in Oklahoma.

The E-6B Mercury, also known as a TACAMO (Take Charge and Move Out), is a Boeing aircraft developed for the US Navy as an airborne communications platform. 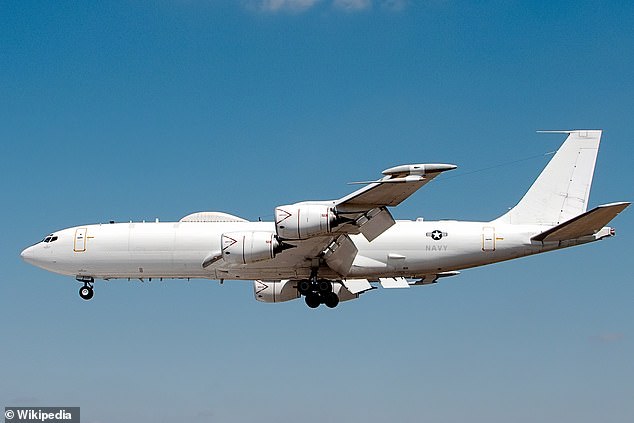 They are used to deliver instructions from the air to US Navy submarines fleets via a transmitter and antenna, according to the manufacturer.

‘The TACAMO airplanes support the Navy’s ballistic missile submarine force, providing a vital link to the force from national command authorities,’ Boeing’s description of it reads.

‘The TACAMO E-6B airplanes are equipped with dual trailing wires that serve as transmitter and antenna, transmitting in the very low frequency spectrum.’

Both E-6B, and E-4B planes, were built to withstand any large electromagnetic pulse generated by a nuclear disaster.

The $141 million planes are a critical part of the Navy’s ‘Take Charge and Move Out’ (TACAMO) mission.

They were accepted by the Navy in 1997 and deployed starting a year later.

The aircraft is just over 150 feet long and roughly 42 feet high.

They are able to do that because they rely on older analogue technology, rather than digital tech which would be fried by the pulse.

The craft carry special equipment and have the capability to communicate with anyone, anywhere in the world, and support analysts and strategists in-flight.  The planes can also be refueled in the air. They were designed to be able to operate in-flight for a full week without needing to land.

There are even four E-4B ‘Nightwatch’ planes that follow the President of the United States, particularly when he goes overseas.

One of the planes is kept running at all times, with the engine running 24 hours a day at the Offutt base when the president is in the US. If an emergency happens, the plane is ready to meet with the presidents almost immediately.

The planes, also called ‘National Airborne Operation Centers’ when they are in-flight, have special equipment and have the capability to communicate with anyone from anywhere in the world and support analysts and strategists on the flight.