Nick Jonas and John Legend showed their funny sides while in quarantine on Tuesday’s results episode of The Voice.

The one-hour show on NBC revealed the five finalists for next week’s season 18 finale with the host, judges and singers participating remotely due to the coronavirus pandemic.

Show host Carson Daly, 46, in another edition of Voice Happy Hour from home asked judges Nick, 27; John, 41; Blake Shelton, 43, and Kelly Clarkson, 38, how they had been doing while sheltering in place.

Deadpan delivery: Nick Jonas showed his funny side while quarantining on Tuesday’s results episode of The Voice as the field was narrowed to the final five ahead of next week’s finale

Nick during the skit deadpanned that he had taken up ‘latte art’ as his fellow judges looked bewildered.

The Jealous singer was shown in his kitchen saying that he started out with simple designs of ‘leaves’ and was working toward a self-portrait.

His wife Priyanka Chopra, 37, made a cameo saying that Nick was going ‘crazy’ with his latte designs and drinking coffee all day.

‘I can’t sleep,’ Nick confided to the camera before asking an eye-rolling Priyanka if she wanted some coffee. 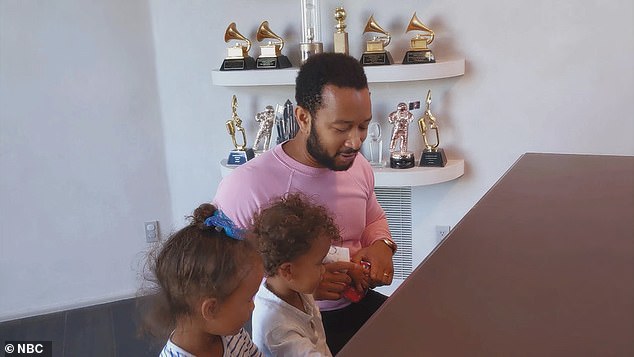 Grammy winner: John Legend also was shown ‘working with some new artists’ at the Los Angeles home that he shares with wife Chrissy Teigen

John told a surprised Carson that he has been ‘working with some new artists’ at the Los Angeles home that he shares with wife Chrissy Teigen, 34.

‘I feel like we’re making a lot of progress,’ John said as his daughter Luna, four, and one-year-old son Miles were shown running around the house.

The 10-time Grammy winner asked Miles to ‘come play music with daddy’, but his son instead was seen running into a wall. 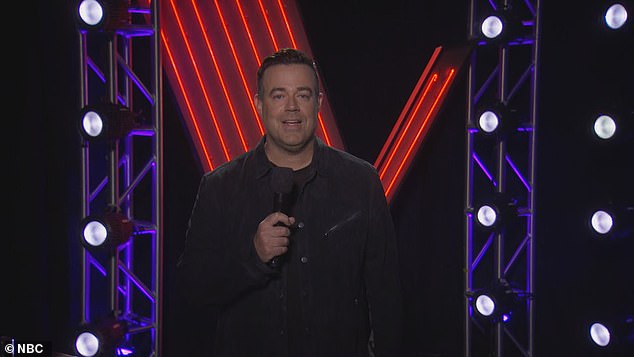 The host: Carson Daly during a Voice Happy Hour segment asked the coaches how they were faring while sheltering in place

Luna and Miles sat with John at the piano, but left once he started with singing lessons.

‘All done,’ John said as the kids played on the ground before he was shown sipping a long drink.

Blake claimed to be doing ‘manly’ things at home in Oklahoma while he was shown gardening and stitching. 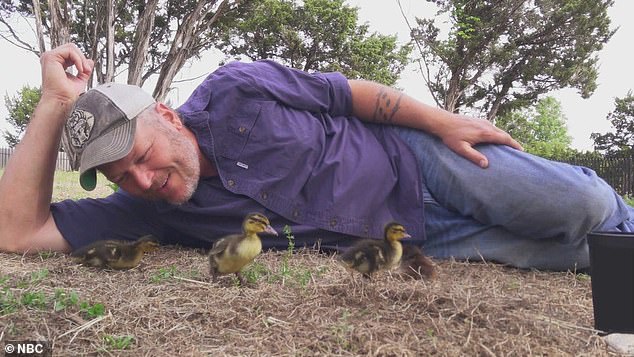 Manly things: Blake Shelton claimed that he was doing ‘manly’ things in Oklahoma

Kelly said she was busy being ‘outdoorsy’ in Montana, but flailed while chopping wood.

The top nine performed on Monday’s two-hour show and the singer who gained the most votes on each team advanced to the finals.

The remaining singers competed in the Instant Save for the first-ever fifth spot in the finals. 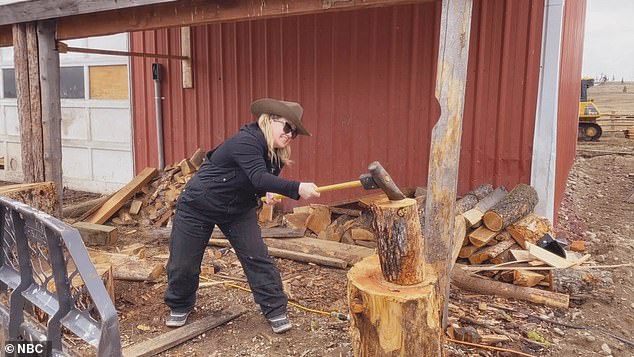 Wood chopping: Kelly Clarkson said she was engaging in ‘outdoorsy’ activities in Montana, but flailed while chopping wood 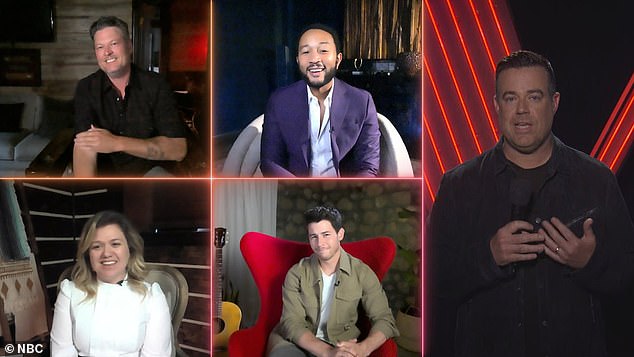 Team Kelly’s Micah Iverson who performed I Will Follow You Into The Dark on Monday won the public’s vote sending Megan Danielle into the Instant Save round.

Todd Tilghman gained the most votes among Blake’s three remaining singers forcing Joanna Serenko and Toneisha Harris into the sing-off.

Nick’s singer Thunderstorm Artemis won the public’s vote over Allegra Miles relegating her into the Instant Save. 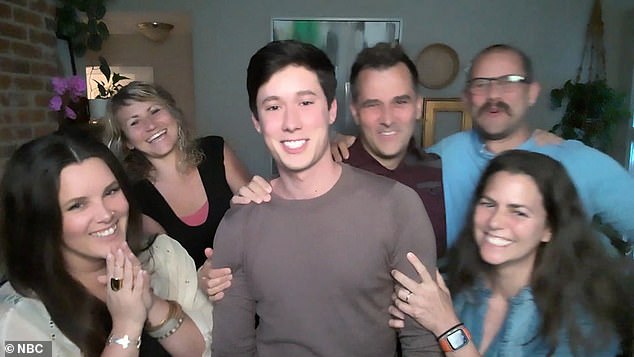 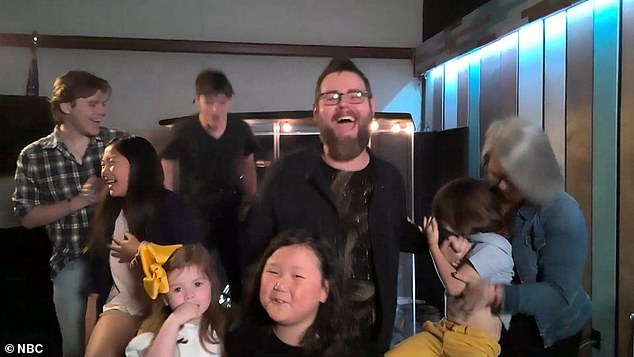 Large family: Todd Tilghman who has eight children won the most votes among Blake’s singers and made it to the season finale 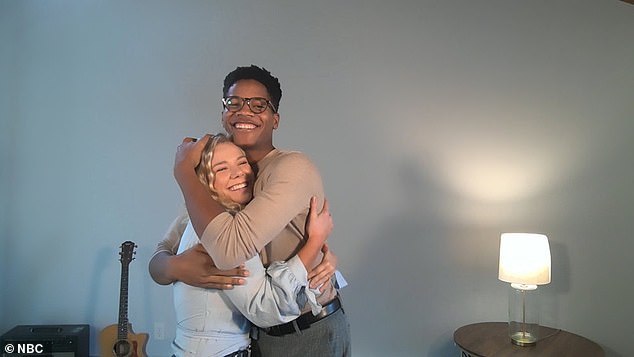 John’s singer CammWess was voted into the finale over Zan Fiskum.

Toneisha performed a stunning rendition of the 1975 Minnie Ripperton song Lovin’ You and won the Instant Save.

John also shared his new single Bigger Love during the show with an uplifting video of social media clips and video conferencing sessions submitted by fans.

The Voice will return next week on NBC with a two-part season finale featuring five singers for the first time. 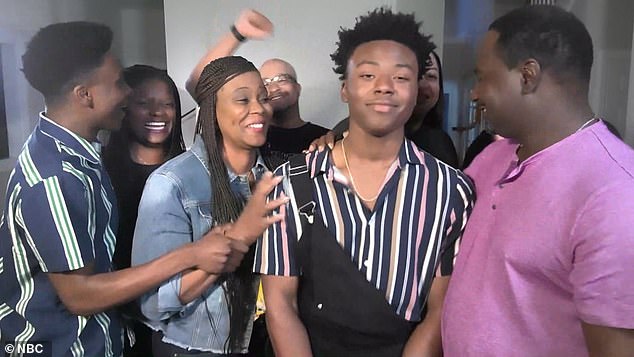 Made it: John’s singer CammWess also made it into the finals by viewer voting 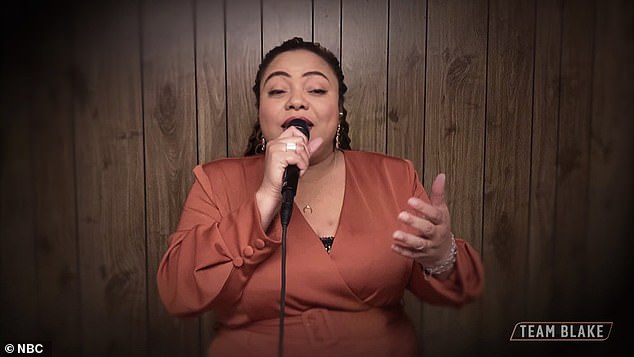 Fifth finalist: Toneisha Harris performed a stunning rendition of the 1975 Minnie Ripperton song Lovin’ You and won the Instant Save to gain the fifth and final spot in the season finale