Verdict: The set’s the star

Solaris is a sci-fi story beloved of chin-stroking intellectuals everywhere.

Both were based on the novel by Polish sci-fi writer Stanislaw Lem. What gets the eggheads excited is that it raises big questions about the nature of consciousness. 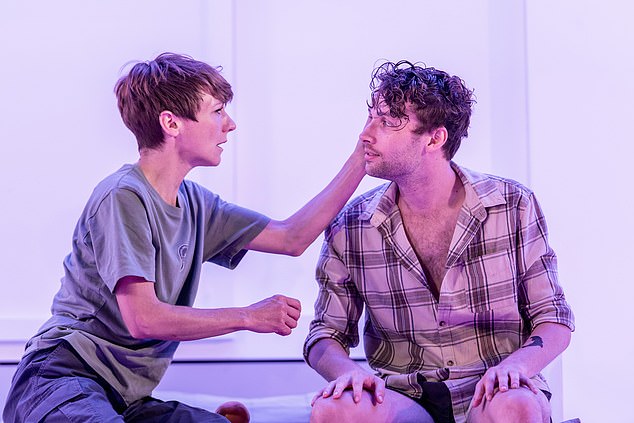 Directed by Australian Matthew Lutton, the show aspires to the state of virtual reality, thanks to the shifting colours of Paul Jackson’s lighting, and Jethro Woodward’s wraparound sound design, which makes you feel like you’re on board the spaceship itself

My biggest problem with both films was not so much figuring out their meaning as simply staying awake.

The tale is of a weirdly sentient distant planet, Solaris, that has developed its own consciousness and begun haunting the minds of the crew on a spaceship.

Adding creepiness to downright weirdness, it brings their dreams to eerie life. Never mind figuring out what it all means, I found both films potently soporific. 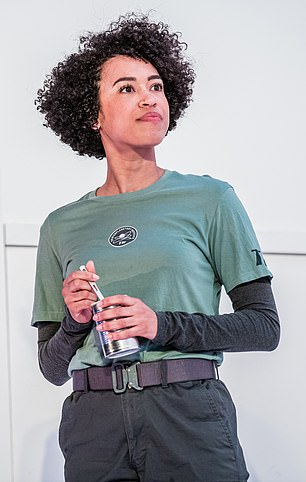 Between the story’s short scenes a huge shutter blinks over the widescreen stage and the heaving waters of the surface of Solaris are projected, as if from a dream

So the first great achievement of David Greig’s fleet-footed new stage adaptation is that I didn’t nod off.

The second is Hyemi Shin’s white box set-design that recreates the spaceship’s multiple interiors with the slick, Sixties finish of Star Trek’s Enterprise.

Between the story’s short scenes a huge shutter blinks over the widescreen stage and the heaving waters of the surface of Solaris are projected, as if from a dream.

Directed by Australian Matthew Lutton, the show aspires to the state of virtual reality, thanks to the shifting colours of Paul Jackson’s lighting, and Jethro Woodward’s wraparound sound design, which makes you feel like you’re on board the spaceship itself.

Even so, I couldn’t help feeling sorry for the actors who have to compete with the seamless spectacle for attention.

Indeed, the set gets to do more acting than the cast — sometimes literally, thanks to a video turn from Matrix and Lord Of The Rings star Hugo Weaving, who plays the ship’s former captain, now deceased. 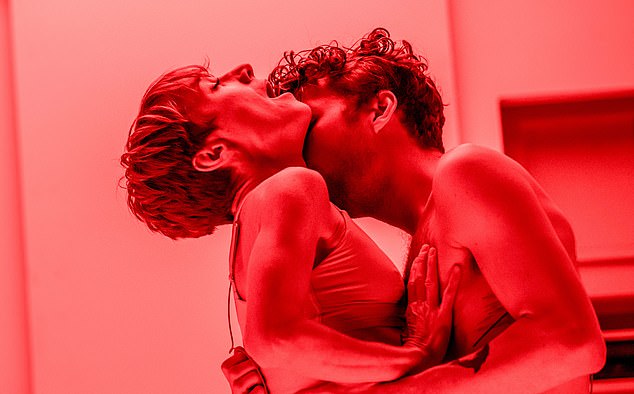 As that lover, Keegan Joyce (above) is more flamboyant — albeit increasingly plagued by his own arcane questions about the status of his consciousness as the embodiment of a memory from someone else’s brain (we can but sympathise)

The sex of the new skipper has been switched, with the casting of Polly Frame, and while this is of little consequence, she is no George Clooney.

Frame is wholesome, cheerful, occasionally quite concerned. But the role needs big‑name charisma to mesmerise us with the story of a woman haunted by a long dead lover.

As that lover, Keegan Joyce is more flamboyant — albeit increasingly plagued by his own arcane questions about the status of his consciousness as the embodiment of a memory from someone else’s brain (we can but sympathise).

Yes, you’re right: without giving too much away, there are at least two dead people on the prowl.

Supporting roles are despatched efficiently but are sketchy. Instead, it’s the set which — like Solaris itself — hogs the limelight.

Fast, at London’s bijou Park Theatre, is no less peculiar, in a different way. It’s the true story of quack dietician Linda Hazzard, who believed you could starve yourself into good health.

She operated out of a sanitarium called Wilderness Heights in Washington State and would, doubtless, prosper in Hollywood today. Between 1908 and 1912, she is believed to have killed 19 people — before doing the same for herself in 1938.

Played by Caroline Lawrie, her bulging searchlight eyes sweep the audience and chill the blood. She holds forth with speeches of self-exoneration while swindling, isolating, and starving gullible patients.

The only thing missing is a moustache for her to twirl. With Natasha Cowley and Jordon Stevens as two of the hapless victims and Daniel Norford as a local reporter, it’s a slight but diverting piece of social history.

Brilliant Bryn is a riot in this jaunty classic 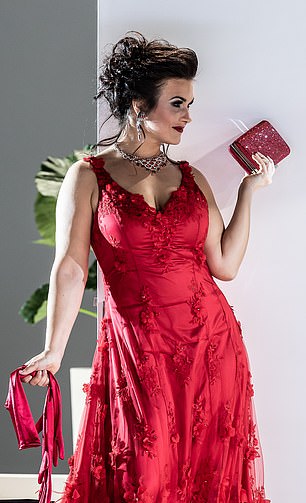 Director Damiano Michieletto keeps everyone on the move in Paolo Fantin’s ingenious set, making good use of the revolve

It is almost a decade since we last saw Donizetti’s comedy masterpiece at Covent Garden and this new production by an all-Italian team is the best since the classic Ponnelle staging of 1973.

Not to spoil any surprises, Bryn Terfel’s elderly Pasquale (pictured) is stuck in the Sixties, while Ernesto and Dr Malatesta are the epitome of today’s Italian cool and Norina is a sparky young lady running a photographic studio. Clever use is made of 21st-century tech.

Since he first essayed Italian buffo roles, Terfel has loosened up and is much funnier.

He is a big fellow — so was the original Pasquale, Luigi Lablache, later Queen Victoria’s singing teacher — but moves like a Welsh rugby three‑quarter and still has the grand voice.

Tiny flaws in their tuning will surely be ironed out as the run proceeds. Austrian baritone Markus Werba (as Dr Malatesta) lacks Italian roundness of sound but is a tidy singer and a convincing mainspring of the action.

Director Damiano Michieletto keeps everyone on the move in Paolo Fantin’s ingenious set, making good use of the revolve. Donizetti wanted the opera in modern dress, so he would probably approve.

From the first bar of the overture, Evelino Pido shows his command of Donizetti style. He gets lovely sounds from the orchestra — special nods to cellist Tim Hugh and trumpeter Ian Balmain.

The chorus is well marshalled in the servants’ Act 3 scene. All I miss is the traditional reprise of the patter duet.

This opera is often accused of being heartless, but it is to everyone’s credit that the composer’s compensating warmth is well brought out.

See it broadcast live at your local cinema next Thursday, with an encore screening on October 27.

Mary Shelley was just 18 when she started her novel that has stood the test of 200 years, so I struggle to believe she was any kind of airhead.

Rona Munro’s excitable new adaptation of the gothic horror story, however, portrays Shelley as a giddy teenage diarist rather than the complex thinker she surely was.

The idea may be to make this production more ‘relatable’ to GCSE students, but it comes at the cost of dumbing down.

Performed with rubber-ball verve by Eilidh Loan, Shelley is on stage almost throughout, making up the story and telling her characters what to do.

She is, essentially, a literary bossy boots as she takes charge of Dr Frankenstein’s ghoulish experiments.

At one point she congratulates herself, saying: ‘That was a proper death bed scene . . . you’re welcome!’

All right, it got a laugh, but I’m more interested in the action than Shelley’s self-opinion.

The plight of his monster is slightly lost amid all the hand-wringing, but Michael Moreland’s rangy zombie impresses as the anti-hero; he bestrides the stage like a buff and articulate Poldark extra.

Patricia Benecke’s production is easy on the eye, with a set that looks like Narnia before the thaw. Our actors shimmy up and down barren, white trees and disappear in and out of coffin-like doorways.

Traces of Shelley’s pre-woke thinking make it through the edit, including her insistence that great men needn’t worry about small matters like conscience or family.

But after that stab in the eye for feminism, it ends with Shelley declaiming about power and responsibility in a story I could have sworn was more about liberty and daring.

The Niceties, is essentially two hours of two women — one young and black, the other older and white — talking at each other, with no possibility of slipping away from this small pub theatre until the interval.

It is a play about ideas, and whether you like it depends on whether you’re engaged by the culture wars about identity, and whether millennials are thoughtful and socially aware young people or irritating snowflakes.

Actually, even if you can’t abide this stuff, you may well be bowled over by the cracking performances.

This extended argument of a play stands or falls by the strength of the two protagonists, and Janie Dee as Janine, a liberal university professor, and Moronke Akinola, as Zoe, the millennial activist, are both utterly convincing.

They don’t play their roles, they inhabit them, to the extent that the lady next to me, who came with her granddaughter, was utterly exasperated with Zoe for spending all her time on university activism. 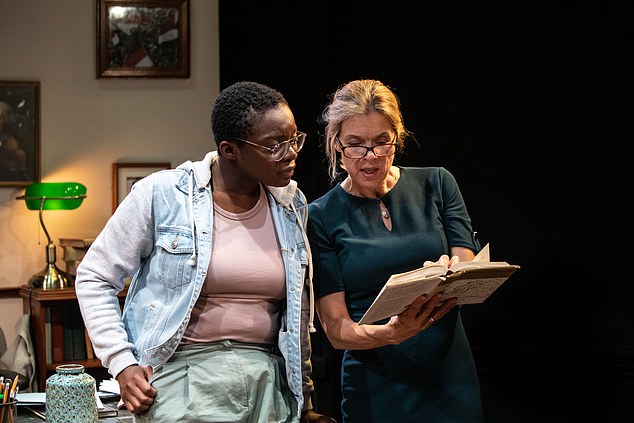 The Niceties, is essentially two hours of two women — one young and black, the other older and white — talking at each other, with no possibility of slipping away from this small pub theatre until the interval

Eleanor Burgess’s play of 2018, which has its European premiere in Matthew Iliffe’s production, is set in an elite US university.

Janine is discussing Zoe’s essay: she says the reason America never had a radical revolution was that slaves were excluded from the process. Janine wants to see evidence, not a web page. Zoe prefers the evidence of her own feelings.

And so we get into the minefield of whether top universities are for white elites, playgrounds for future investment bankers, addressing white concerns, and whether traditional academic scholarship is worth anything.

Zoe is quite fantastically irritating: quick to take offence, fabulously rude, and, it turns out, recording the whole conversation on her phone.

In the second half, Janine is surrounded in her office by packing cases; the public row about their quarrel has ended badly for both. Moreover, we find that Janine is in fact lesbian and working class: so, more identity issues.

At the end, the discussion ends: the women have nothing to say to each other. But it gives plenty for the rest of us to talk, and think, about.

The Girl Who Fell (Trafalgar Studios 2)

Welcome to the Trafalgar 2: a studio theatre smaller than my flat. We, the audience, are crowded round a tiny lit clearing of a stage and a shaky set to experience the fallout of a young girl’s suicide.

It’s a difficult tale to make witty and warm, even with the strong added whiffs of rom-com.

Despite the serious — grim — subject matter, Sarah Rutherford’s new work (which I saw in preview this week) is playful and light.

But it’s also terminally shallow and emotionally slender. Between the mum (Claire Goose), the best friend and the boyfriend (Rosie Day and Will Fletcher giving us good flouncy teenager), and a stranger (Navin Chowdhry), we slowly learn what happened, and the impact it’s had on their lives.

We jump uncomfortably (and unconvincingly) from jovial joshing to devastating drug problems and back again.

My least favourite theatrical blueprint (after dreadful shows which run chronologically backwards…I’m looking at you, Merrily We Roll Along!) is the one where, prior to the action of the play, something huge has happened, and the ensuing drama is just a series of scenes which unveil that mystery.

It rarely works, and usually winds up being tiresome.

The circumstances of the suicide come to light agonisingly slowly, important interactions in the build-up are revealed, and some (pretty obvious) twists are thrown in; but it’s all so undramatic and unsurprising.

At the centre is a fascinating crisis that’s ripe for artistic examination: the effect of social media on young people’s mental health.

The best friend, a Shakespeare-quoting teen with a short school tie who only drinks ‘white chocolate mochas’, says it would be more normal to ‘run off to Syria’ than delete Instagram. But that’s as close as we get to exploring the problem.

‘Social Media’ is just dropped into conversation for relevance every so often, with the unfounded confidence of my Grandma saying ‘DVD’.

This isn’t helped by the broad and sketch-like performances, which (when you’re sitting 4ft from their faces) are quite a problem.

Thankfully, there is a streak of charming humour. Although a scene, played for laughs, where the mother is weeping and praying for her dead daughter, was a strange, uncomfortable watch.

Real life — complete with real-life tragedies — is just as complicated and contradictory, but a million percent more convincing than this manufactured ‘viral tragedy’.