A veteran who received the world’s first penis transplant after losing his legs during an explosion in Afghanistan has revealed it was the ‘best decision he ever made’.

The US Navy corpsman, known only as Ray, was tending to wounded soldiers during an ambush by the Taliban when he stepped on a roadside bomb in 2010.

Ray, who is in his 30s, lost both his legs, genitals, and part of his abdominal wall and was forced to learn how to walk on prosthetic legs after the tragic accident.

The soldier revealed his life-changing injury – which he kept a secret except from loved ones – had even made him contemplate suicide.

But a year-and-a-half after the mammoth 14-hour surgery, Ray has almost regained full sensation in his new penis, and is able to get an erection and urinate.

The US Navy corpsman, known only as Ray (pictured after his operation in 2018), was tending to wounded soldiers during an ambush by the Taliban when he stepped on a roadside bomb in 2010 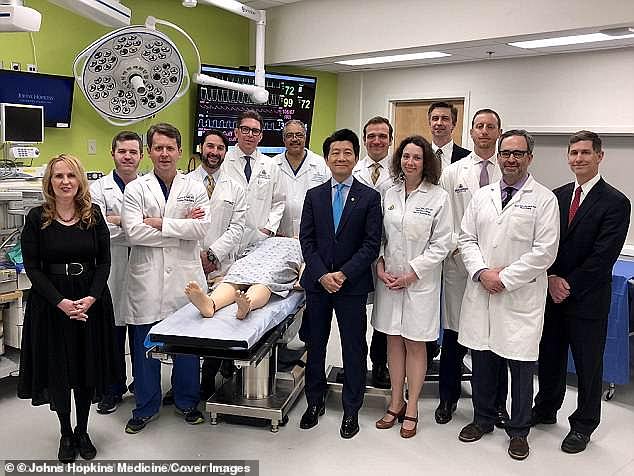 But in 2018, medics performed a groundbreaking 14-hour surgical procedure in the first of it’s kind ever performed at Johns Hopkins Medicine in Baltimore (pictured in 2018)

‘It was one of those injuries that really stresses you out and you think, “Why would I keep going?”,’ Ray said in an interview with MIT Technology Review.

‘I guess I always just kept this real hope that there’s an answer out there.’

Speaking about the traumatic experience to the media for the first time, Ray said he ‘remembers everything’.

‘I remember thinking a quick thought: “This isn’t good.” And then I was on my back,’ he said.

In 2013, Ray met Dr Richard Redett, a plastic surgeon at Johns Hopkins Medicine in Baltimore who decided he may be an ideal candidate for a penile transplant.

His team of surgeons lead a major program that aims to give penis transplants to 60 soldiers who have been injured.

Ray said: ‘This was actually something that could fix me. I could go back to being normal again.’

However, Ray’s procedure was the first time any medical team performed a total penis and scrotum transplant, which is far more complicated.

After surpassing the high bar of necessary requirements – he needed to have a urethra and a specific set of blood vessels, Ray decided it was worth waiting for a donor penis.

Ray received the life-changing news in March 2018 that donor was available in another state. He was walking his dog at the time.

The infantryman raced into action while medics boarded a charted jet from Maryland to meet the donor – a brain-dead man – before transporting the penis on ice to the hospital to begin the 25-surgeon operation at 2am.

‘We felt very confident we could do it, but we had never done it,’ said Dr Redett. ‘If you’re not anxious for something like that, you’re not thinking hard enough.’ 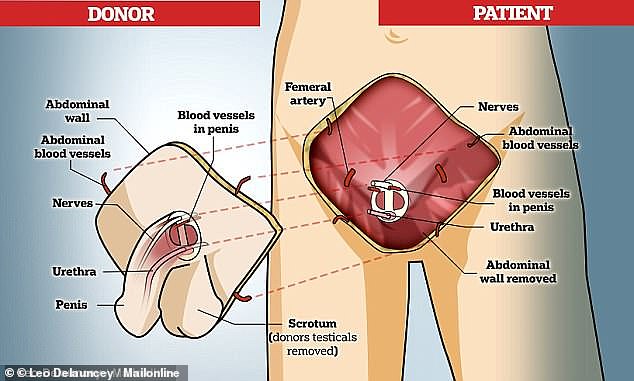 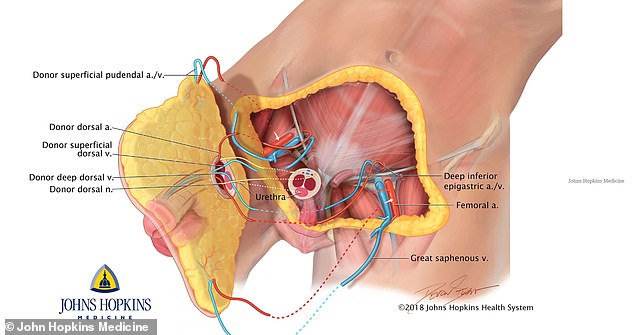 Surgeons had to stitch nerves, arteries, veins and blood vessels finer than human hairs from the transplant penis to Ray (pictured). It also involved some abdominal wall 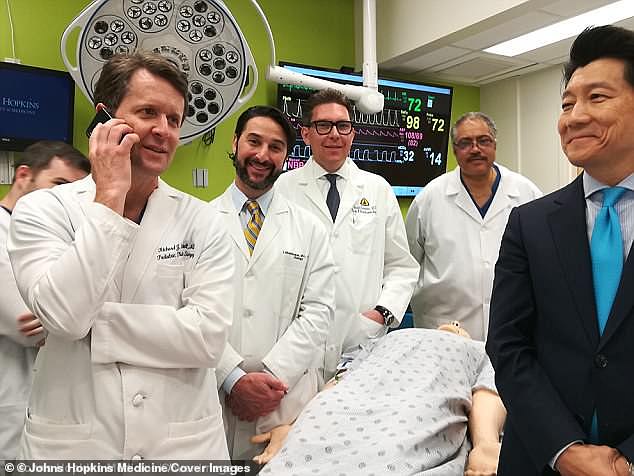 In 2013, the veteran met with a plastic surgeon, Dr Richard Redett (see left) of Johns Hopkins Medicine in Baltimore, who said he was the perfect candidate for a penile transplant 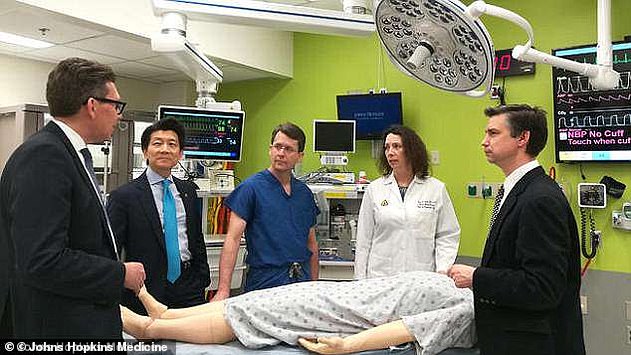 Most men needing a penis are given a phalloplasty, a member made of tissue, blood vessels and nerves taken from a forearm or thigh.

But these operations tend to carry a high infection risk and the patient doesn’t regain natural use of his penis.

A total penis transplant, where the body part is transferred from one individual to another, is called vascularized composite allotransplantation.

Surgeons had to stitch nerves, arteries, veins and blood vessels finer than human hairs from the transplant penis to Ray.

The donor’s scrotum was transferred – but their testicles were removed for ethical reasons to avoid the risk of the patient having his babies.

It is not clear if the scrotum is empty or contains prosthetic testes. He won’t be able to have biological children because his own reproductive tissue was destroyed.

However, he takes testosterone to compensate for the loss of his testes and is being treated with another drug, Cialis, to encourage spontaneous erections.

‘For him, it was almost either you do this transplant, or you live the rest of your life with your defect,’ said Dr Redett.

Ray had to wait two days after surgery before he saw his transplant for this first time, describing it as ‘swollen’ and needing to heal.

‘In the back of your mind, you know this is a transplant, and you wonder if it’s going to be too much for you to handle. Once I went through with the surgery, all of those concerns just went away,’ he said.

Dr W.P. Andrew Lee, the chairman of plastic and reconstructive surgery at Johns Hopkins, told The New York Times they are hopeful Ray will be able to achieve orgasms – but he won’t be able to ejaculate because he doesn’t have testes.

After the surgery, Ray was put on a regimen of immunosuppressive drugs to prevent tissue rejection, which is a concern with any transplant surgery.

Urologist Andre Van der Merwecalls, who performed the first successful penis transplant in the world in 2014, said Ray’s procedure was ‘the most complex to date’ because of the scope of his injury.

There had only been four penis transplants before Ray’s – the first was in China in 2006 which was unsuccessful.

The second was in South Africa in 2014 which was a success. The third was in Massachusetts in 2016, a 64-year-old man who lost his cancer to penis. And the fourth was in Cape Town for a 41-year-old victim of a circumcision gone wrong.

Despite keeping his identity private, and only telling his parents about the loss of his private parts, Ray said he wanted to let other veterans know about their options.

According to a report released in 2017, 1,367 male US service members sustained one or more genitourinary (GU) injuries between October 2001 and August 2013.

The majority of injuries involved the external genitalia including the scrotum, testes, penis and urethra, which can impair several abilities including having sex, fathering children and urinating normally.

Almost 94 per cent of the sufferers were 35 or younger ‘during their peak years of sexual development and reproductive potential,’ according to the US Department of Defense’s TOUGH (Trauma Outcomes and Urogenital Health) report.

TOUGH say among infantrymen with genital urinary injuries from Iraq and Afghanistan, 502 were injured so severely that a penis transplant might be their only option.

How will the team identify a suitable donor?

Dr Redett said the organ will come from a deceased person, but added the person’s family will have to consent before the procedure can go ahead.

He said: ‘Many people might think that organ donation means unquestioned consent of all organs.

‘That’s not the case with the face, hand or penis.’

He added that once found, the donor tissue is evaluated on a variety of factors, inclidong blood type, age – within five to 10 years – and skin tone.

How do you identify which patients need a penis transplant?

Dr Cooney said as with other transplant operations, the patient has to be in good physical and mental shape,

She said psychiatric evaluations can take up to a year before a patient will be approved to have the operation.

‘There’s a significant loss with the initial injury that the patient has to overcome emotionally.

‘If the patient has a significant other when he begins working with our team, we also work to educate that person on what to expect.

‘We can’t guarantee the outcome or the extent of urinary function, erection, and ability to have sexual intercourse or have children.’

How long do you anticipate before the donor penis will be fully functioning?

Dr Redett said the first priority is to ensure the transplanted tissue has adequate blood supply, to prevent immediate rejection.

He said that should be apparent within a few days to weeks.

‘The next priority will be to regain function,’ he said.

‘Nerves grow at a rate of one millimeter per day, about one inch per month.

‘We anticipate that acheiving function, including urinary and sexual function, could take between six to 12 months.

‘If the patient’s testes are still present, he may even be able to father children.’

What precations are taken to try and prevent the risk of rejection?

Dr Cooney said the patient will be given immunosuppressive drugs follwing the procedure.

Ten to 14 days later he will receive a bone marrow infusion from the donor.

‘By doing that, we have been able to reduce the number of anti-rejection medications the patient will have to take for the rest of his life, down to one pill twice a day,’ she explained.