Vladimir Putin is setting up a Russian encyclopaedia online after declaring that Wikipedia was unreliable and should be replaced.

The Russian president said his country would no longer welcome the crowd-sourced online encyclopaedia which began in the US.

The new site costing £20.7million will be a web version of the Great Russian Encyclopaedia and show ‘reliable information in a good, modern way’.

But John Lubbock, a communications coordinator for Wikimedia, said it was unclear how Mr Putin would improve on the Russian Wikipedia.

He wrote on Twitter: ‘Russian Wikipedia is the seventh biggest language version of the site, with over 1.5 million articles created by 2.6 million users, all published on Open Licenses.’ 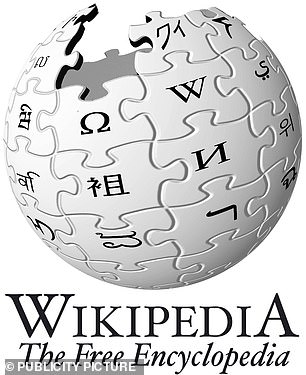 Wikipedia currently has over 1.5 million articles created by 2.6 million users

According to RIA Novosti news agency, he said: ‘As for Wikipedia… it’s better to replace it with the new Big Russian Encyclopaedia in electronic form.

‘At least that will be reliable information, presented in a good, modern way.’

In 2015, Russia briefly blocked the Russian-language version of Wikipedia for an article containing information on cannabis under legislation banning sites with drug-related material.

The government will now also set up a national research and education centre for the site.

Moscow has also introduced tougher online controls over the Russian segment of the internet so that it can keep functioning even if it was cut off from foreign infrastructure.