MPs are likely to support a rebel amendment this afternoon which will scupper Boris Johnson‘s Brexit plan.

The Prime Minister wants MPs to formally back his deal today but a proposal put forward by Sir Oliver Letwin is expected to ruin the premier’s hopes of making Brexit progress.

The amendment has cross-party backing and will ultimately force the PM to ask the EU for a Brexit delay under the terms of the anti-No Deal law known as the Benn Act.

If it is agreed, the amendment does not kill off Mr Johnson’s deal and it would still be possible for him to deliver Brexit by October 31.

But the path to fulfilling his ‘do or die’ Halloween pledge will be fraught with difficulty and the chances of a Brexit delay will increase exponentially.

Here is a breakdown of what is likely to happen if the amendment is passed by MPs.

What does the Letwin amendment do?

It would withhold support for the PM’s deal until such a time as the government has brought forward and passed the legislation needed to actually make an orderly Brexit happen.

By failing to agree to a Brexit deal by close of play today, the provisions outlined in the Benn Act would be triggered and the PM would have to ask the EU to push back the current departure date.

The amendment would effectively postpone the ‘meaningful vote’ on the accord until the government has got its Withdrawal Agreement Bill through Parliament.

Boris Johnson, pictured in the House of Commons today, is urging MPs to formally back his proposed Brexit deal 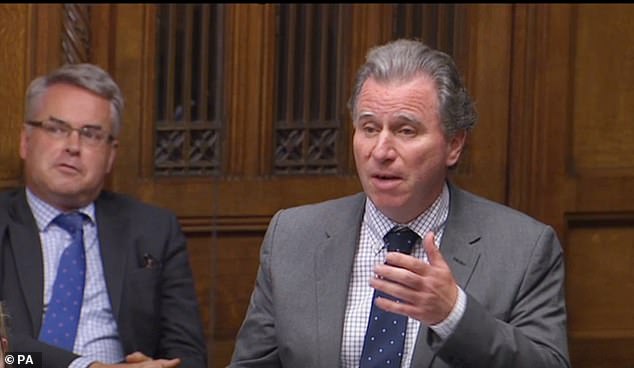 The thinking is that by withholding support for the deal until key Brexit legislation is in place, MPs will further protect against the possibility of the UK leaving the EU without a deal on October 31.

Some Remainers are suspicious that if MPs back the PM’s deal today and there is no extension, Brexiteers who want a No Deal split could then scupper the passage of the laws needed to deliver an orderly exit, causing a bad break on Halloween.

What will happen if the amendment does pass?

The PM will have to comply with the Benn Act and send a letter to the EU asking for a Brexit delay.

He would then likely bring forward the Withdrawal Agreement Bill on Monday this week to try to crash it through Parliament as quickly as possible.

If he was able to get MPs and peers to agree to the draft legislation in the coming days he would then be able to hold the ‘meaningful vote’ on his deal, paving the way for the UK to leave the EU on time.

How likely is it that MPs and peers will agree to the Withdrawal Agreement Bill?

The Letwin amendment will effectively rob the PM of the chance to test whether there is a majority for his deal.

That means that nobody will know for certain whether there is a majority in favour of the so-called WAB.

Even if there is a majority it is likely to be a slim one which will make the passage of the legislation incredibly difficult as rebel MPs potentially try to amend and change it.

Draft laws have been rushed through parliament in quick time before but whether something as divisive as the legislation to deliver Brexit could be dealt with equally as swiftly is unclear.

What happens if the PM is able to get the Brexit law agreed and win a ‘meaningful vote’ before October 31?

The UK could still leave the EU on the current timetable but the closer we get to Halloween the tougher that becomes and the chances of a delay increase.

If the PM can get the deal signed off by MPs by the end of the coming week – a big if – his ‘do or die’ pledge could still be stuck to.

But anything beyond that and time will get extremely tight because once MPs have agreed the deal it still has to go through the European Parliament.

What is the EU likely to do?

If the amendment is agreed and the PM sends the Brexit delay letter the EU will have to decide whether to offer an extension.

The most likely scenario is that the bloc will keep its powder dry and not formally respond until it has seen whether the PM can win a vote in the Commons this coming week on the Withdrawal Agreement Bill.

If he can, then Brussels will probably hold fire on offering an extension on the grounds that the UK could still agree to a deal and leave on time.

If he cannot win a vote on the WAB this week and his deal looks dead then the bloc will face more pressure to make a final decision on any delay.

It is thought in such circumstances the bloc would offer a postponement in order to stop a No Deal Brexit.

That would pave the way for a general election potentially being held before the end of the year.

Could there be an emergency EU summit?

If the PM is able to make progress in the coming days and win a vote on the WAB but he is unable to get everything done by the end of the week there could then be an emergency summit held in Brussels on October 28.

If the PM’s deal is still alive but more time is needed to get it through Parliament European leaders could agree to a short extension.