Who’s a clever boy! Dogs understand human language better than we thought and can pick up on the subtle difference between ‘hid’ and ‘had’

Dog owners may be onto something when they insist their dog is more intelligent than you’d think.

A study from the University of Sussex found their comprehension of human language goes far beyond just ‘sit’, ‘walk’ and ‘fetch’.

Our canine companions are adept at picking up on subtle changes to words, such as ‘hid’ and ‘had’.

The research also discovered that man’s best friend is also able to decipher various accents, from the Queen’s English to the thick West Country twang.

Collie the border Collie (pictured) is heralded as one of the smartest dogs and before her death was able to identify more than 1,000 toys by name and fetch them on request. New research found that dogs are adept at detecting different words, even if they sound similar

But in spite of the promising new findings, not all canines are created equal, with the standard being set by a record-breaking border collie called Chaser.

The pet from North Carolina, who died earlier this year, could identify more than 1,000 toys by name and fetch them on request.

The study of 42 dogs, published in Biology Letters, also found dogs can tell the difference between regional accents.

Researchers played recordings of four different people saying the same word to the pets and then followed it up with a word that sounded slightly different.

The word ‘hid’ would be substituted for ‘had’, for example, and the assessors noticed that the animals reacted strongly when the word changed.

They turned their head sharply and looked at the source of the voice for longer, indicating they were aware it was different to the others.

Dr Holly Root-Gutteridge, the first author of the study from the University of Sussex, said: ‘In cartoon strips, dogs listening to their owners are shown to hear ‘blah, blah, blah, walkies’.

‘But these results show they have more advanced language skills than we give them credit for, and I actually know dogs that can respond to 75 different commands.

‘Dogs probably gained the ability to distinguish between the barks of other dogs so they could work out their size, and then they started paying attention to our language after we domesticated them.’ 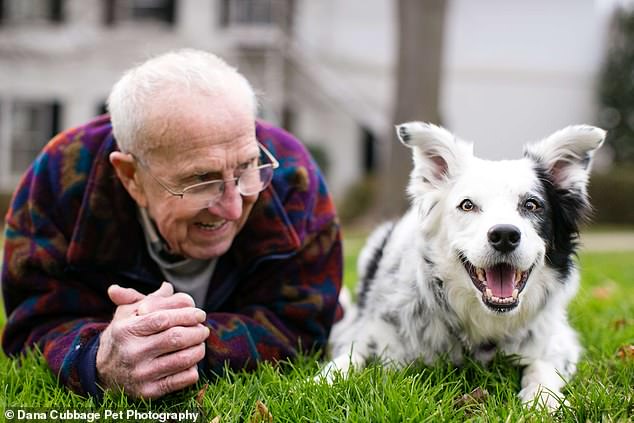 The study of 42 dogs, published in Biology Letters, also found dogs can tell the difference between regional accents. Researchers played recordings of four different people saying the same word to the pets and then followed it up with a word that sounded slightly different and recorded their reactions

Words were played through speakers as said by both men and women.

The dogs responded strongly to the first voice, by looking at the speaker, turning their head towards it or raising their ears for three seconds on average.

As different people repeated the same word, the attention span of the dogs dwindled.

But when the word being said was altered, from ‘hood’ to ‘had’ for example, the pets reverted to the original response, proving they recognised it as a new command.

Scientists say their findings suggest dogs can recognise short words as being the same when spoken by different people, including commands.

‘This research shows that, despite previous assumptions, this spontaneous ability is not uniquely human and that dogs share this linguistic talent, suggesting that speech perception may not be as special to humans as we previously thought.’

The full findings were published in the journal Biology Letters.

HOW DOES YOUR DOG CHANGE YOUR MIND AND BODY?

– This boosts your mood and long-term memory

– Eye contact and touch are potent triggers of oxytocin and dopamine

– Dogs we perceieve as aggressive, such as bull dogs or German shepherds, initiate the fight-or-flight response

– This triggers the release of the stress hormones cortisol and adrenaline