A woman who was married when she met her now-husband on an extra-marital affair site has revealed she has ‘no regrets’ – despite not speaking to some family members for over 10 years as a result.

Stephania Meyer, 47, from Toronto, told how before signing up to Ashley Madison, she was a stay-at-home mother and all she and her then-husband had in common were their children.

The couple had been married for 11 years when she decided to join the leading married dating site, where she met Michael Oshust – and an affair quickly began.

When her straying was discovered after just three months, Stephania decided to leave her husband for Michael – and the pair have since tied the knot.

‘While I’m not proud of the way we met, I couldn’t be happier that we are together,’ explained Stephania. ‘I have no regrets and this was absolutely the right choice for me.’

Stephania Meyer, 47, from Toronto, has spoken out about why she chose to join an extra-marital affair website. Pictured, with her now-husband, Michael Oshust at Las Vegas Bellagio in 2013 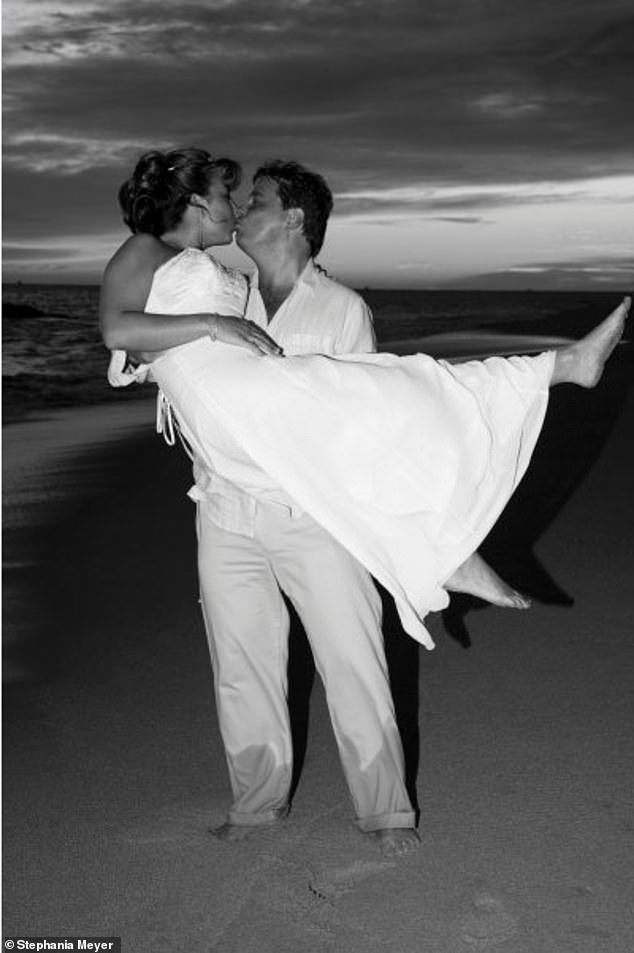 Stephania and Michael tied the knot three years after their affair was discovered – and they have since been together for over 12 years. Pictured on their wedding day

She continued: ‘However, I do acknowledge the toll it took on my personal life and how I was harshly judged by those closest to me.’

‘In the beginning, I lost friends who had been with me for many years. Some felt I was so wrong for cheating, some thought they couldn’t trust me.’

‘I haven’t spoken with certain family members for more than 10 years, some of which live about 10 minutes away.’

Stephania, who was 32 when she decided to join the site, admitted she had never been or been tempted to be unfaithful before.

‘I heard numerous radio ads for Ashley Madison and it peaked some curiosity as I was missing companionship in my marriage,’ she explained.

‘My husband and I had already been discussing separation. This was a way for me to dip my toes into a life outside my marriage.’ 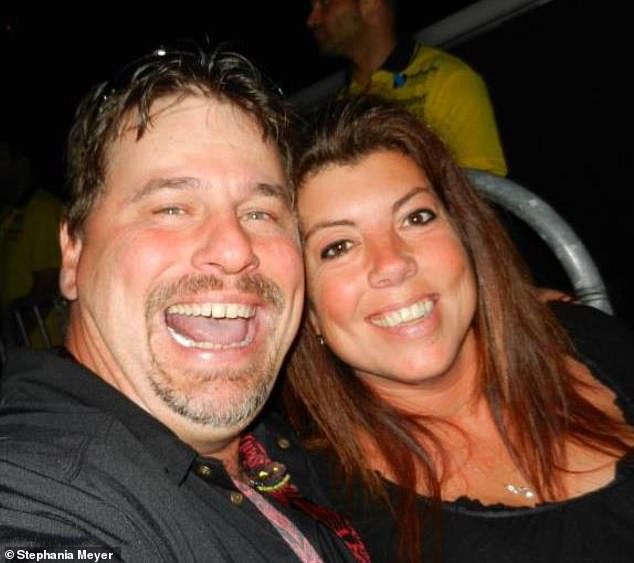 Stephania and Michael (pictured at a Motley Crüe concert in 2015) met in person just six weeks after chatting online – and said by that point, they both knew they had ‘a connection that was unlike any other’ 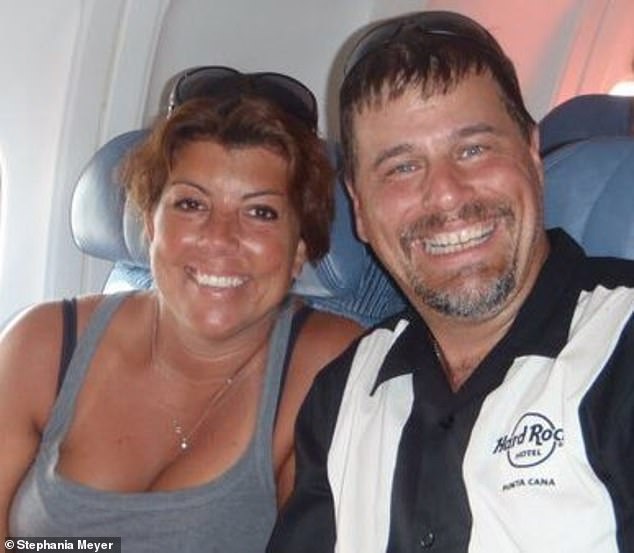 Stephania admitted she’s not proud of the way she met now-husband Michael (pictured together) but insisted she has ‘no regrets.’ Pictured returning home from Punta Cana in 2016

But while she made the decision to embark on an extra-marital affair, Stephania said it didn’t stop her from feeling guilty.

‘I never got married with the intention to cheat, or hurt my husband and family,’ she said. ‘But I also never thought I’d wind up being so lonely in my marriage. I knew it wasn’t sustainable. I craved a romantic connection and intimacy.’

It wasn’t long before Stephania met a match in Michael, who was going through a divorce at the time, and just six weeks after chatting online, they decided to meet in person – and in secret.

‘We had been messaging, texting and having phone calls daily up until that point,’ she explained. ‘I enjoyed getting to know him and felt a genuine connection early on. I wanted to see where it would go. It was exciting.’

She added: ‘We met at a coffee shop that was half way between both our residences. I didn’t really have to bother making up an elaborate excuse to tell my husband.’

‘I was a stay at home mom at the time with my own part-time business so I was able to say I was at “work”. The anticipation for the date was exhilarating since we talked so much leading up to that first face-to-face encounter.’

But despite the thrill in her own life, the busy mother admitted she didn’t worry about the impact of the affair on her children.

‘I was in a different head space as I had found someone who I connected with,’ explained Stephania. ‘I was prioritizing my own happiness for the first time in a long time. I felt rejuvenated and alive again.’ 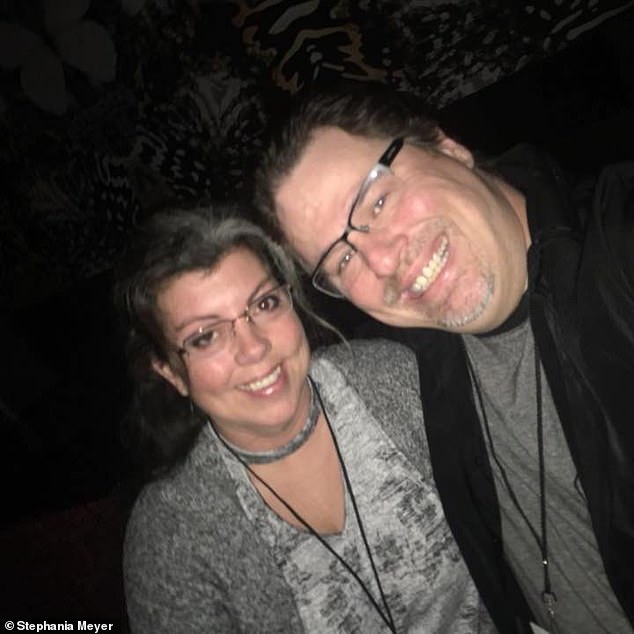 Speaking of juggling two different lives, Stephania (pictured with Michael at a Jason Bonham concert in 2018) explained: ‘It was incredibly difficult to maintain both worlds – one predictable and routine, the other exciting and adventurous’

Stephania went on to say she and Michael started a relationship ‘almost instantly.’

‘By the time we actually met, we knew we had a connection that was unlike any other,’ she explained. ‘We didn’t want to be apart, so we basically had to figure out from that first meeting onward how our future would unfold. It moved quickly.’

But juggling two separate lives didn’t come easy for Stephania – who had to sneak about so she wasn’t caught out.

‘It was incredibly difficult to maintain both worlds – one predictable and routine, the other exciting and adventurous,’ she explained. ‘I had the responsibilities that accompanied motherhood and marriage, but had a budding affair partner that made me feel like a giddy teenager on the inside.’

And it was three months in that her then-husband suspected something wasn’t quite right.

‘He didn’t suspect anything at first,’ she said. ‘He did tell me later on that something was different about me. He noticed I seemed happier and generally more full of life. He eventually found messages and emails which confirmed his suspicions.’

‘At the time I was at my affair partner’s hockey game. My husband called my phone and confronted me. Honestly, it was almost a relief that he now knew.’

Stephania and Michael tied the knot three years later in Los Cabos – and she says 12 years later they still have the same connection.

‘He is my best friend, my better half, my rock,’ she said. ‘My girls were very young at the time, and didn’t really understand.’

‘When they were old enough to understand, I was completely honest with them and told them about how I met Michael and the impact it had on all involved.’ 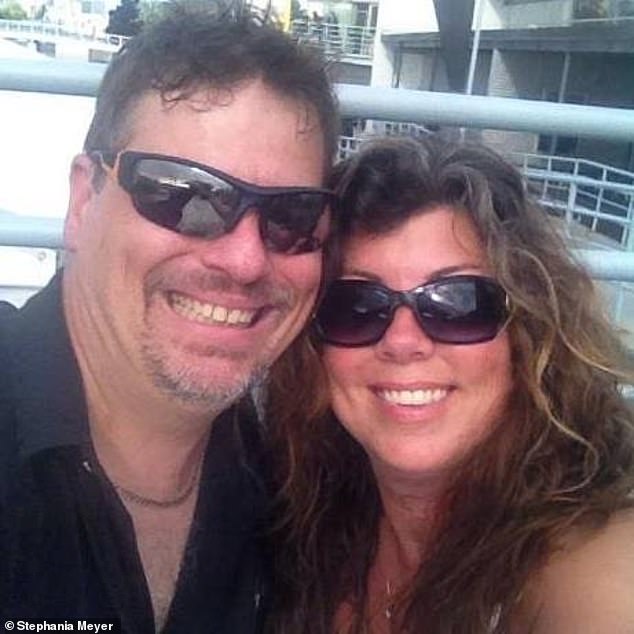