Get out of that! Workman is left stuck with his legs wrapped round a lamppost after his mates prank him

By Emily Webber For Mailonline

A builder gets himself into a knotty situation with his legs wrapped round a lamppost after his workmates play a prank on him.

Footage shows the builder take on the prank at a housing estate in Darlington, County Durham.

His friend posted the video and said: ‘My workmate was adamant he would be able to get himself out of it but he was wrong.’ 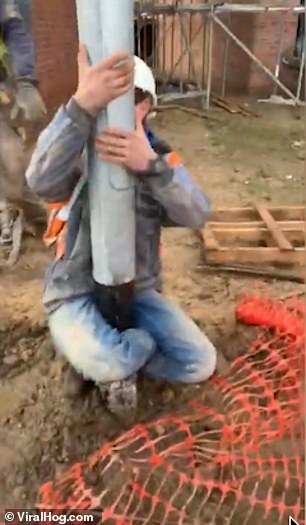 The builder appears puzzled with his legs crossed around the lamppost in Darlington, County Durham (left). He tries to hoist himself out of the prank but is unsuccessful (right)

And his workmates are left in hysterics as the builder tries to hoist himself up from the ground when he cannot untangle his legs from the lamppost.

He says: ‘You can’t get back up can you? Before his friend pushes his shoulders down to make the task even harder.

‘How do you get up? I’ll see you tomorrow’, he says as his workmates walk away laughing. 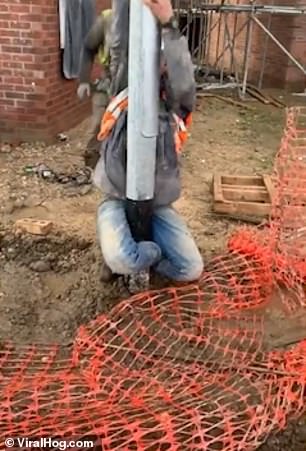 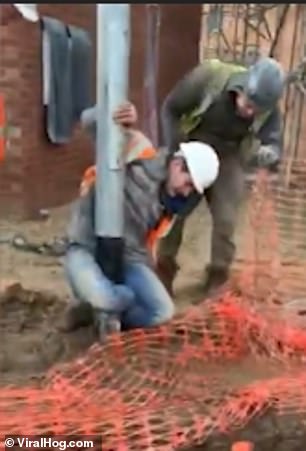 One builder tries to help him up but it proves unsuccessful (left). The builder looks at his knotted legs to see if he can wriggle out of the position (right)

After watching him struggle, his workmates decide to pull him up and run over to the foolish builder.

One builder attempts to lift him up but his legs remain knotted around the lamppost.

He says: ‘You are snapping my ankles!’ 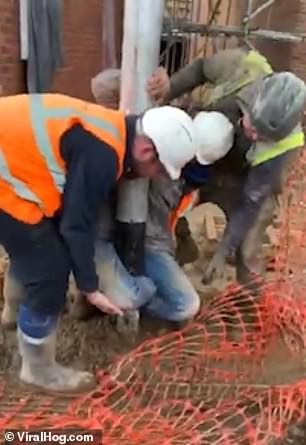 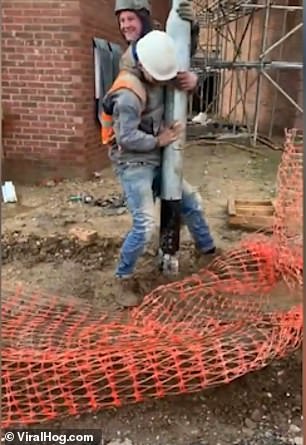 Finally two builders come to his rescue and hold him up by his knees (left). The builder stumbles to his feet as he is set free from the prank (right)

Another builder counts him in and tries to pull the man up but fails again to release his tangled legs.

Finally two builders set him free by holding a knee each and pulling him up.

The man stumbles to his feet on the building site and still appears in good spirits despite the embarrassment.

The prank is best pulled off by convincing someone to straddle a lamppost before lowering them to the ground with their legs crossed.

Unless the victim has extreme upper body strength, they must be lifted out of the position by two other people.

The prank should not be attempted without people on hand to get the victim out of the position.

It dates back to the World War II and is derived from a restraint technique called The Grape Vine used by special forces.

After 15 minutes in the unbearable position, cramp sets in, causing the person to release their hands to relieve the pain.

This puts pressure on the rib cage and restricts breathing, which causes the person to pass out.